Named for famed English novelist Charlotte Bronte, it is generally agreed that "Old Bronte" as a town came into being shortly after the county was organized in 1889. "Old Bronte" was located half a mile southwest of its present location. It was built there because of the availability of water from West Kickapoo Creek. When it was learned that the Orient Railroad was planning to come through the eastern part of the county, talk began of moving the town to the railroad. The move began in 1906. Old timers tell of moving the town by means of old wooden rollers. "They would put a stake and pull it forward 50 feet. Then the process would be repeated until they got to their new location. Bronte, at that time was only farmland. When we moved, we sold goods right along up the old location to the new one." Incorporated in 1907, Bronte is located 56 miles southwest of Abilene and 32 miles north of San Angelo. The remains of Fort Chadbourne are located on private land 14 miles northeast of the City on Hwy 277. Driving tours of the grounds are free from daylight to dark, seven days a week. The Texas Theater is located in the downtown area and was built in 1947. It was featured in a Japanese TV commercial and has recently appeared on the cover of Texas Monthly magazine. Bronte is located in East Coke County.

Bronte, on U.S. Highway 277 at its junction with State Highway 158 in east central Coke County, was founded in the late 1880s and named for the English novelist Charlotte Bronte. J.B. McCutchen drove a herd of cattle into the area from Santa Anna in 1889, and other settlers followed, including Dr. W. F. Key, who started the town. Lumber was hauled from Ballinger for the town's community's early buildings. Oso and Bronco were the town's original names, but the post office rejected Bronco to avoid confusion with another town. Bronte had a post office by 1890, when it also had two churches and a school. Its population was 213 in 1900.

The Kansas City, Mexico and Orient Railway was completed through the area in 1907, and around this time Bronte was moved a mile to be near the track so it could become a shipping point on the railroad. The first train, however, reportedly did not run until 1909. In 1910 the town had a population of 635 and a number of businesses, including two cotton gins, a bank, and a newspaper (the Enterprise, established in 1906). When Kickapoo Creek flooded in 1953, it led to the founding in 1959, with the federal support, of the Kickapoo Coke County Water Control and Improvement District. Bronte's population was reported as 999 in 1960, some 925 in 1970, 983 in 1980, and 962 in 1990. The population grew to 1,076 in 2000. Local tourist attractions include Fort Chadbourne. Recreation areas in the vicinity include Oak Creek and Lake Spence, a 14,950 acre site for water sports. 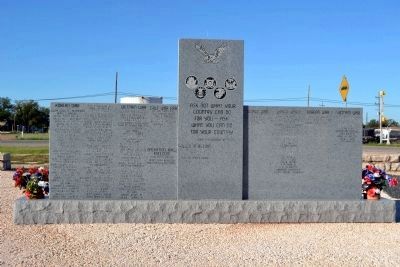